I'm a Scientist: Supported by Wellcome and UKRI
Skip to content

How did we learn to walk?

What happens when we have a brain freeze? when we eat something cold and then our head hurts.

How do we turn thoughts into something we understand???

why do aneurysms develop in our brain?

Does Ronaldo’s arrogant nature get passed down through Genetics?

If you are getting attacked, is the head the thing you have to protect the most? (1 Comment)

Who would you of voted for ?

Why do lots of people have the falling dream?

Is there a scientific reason Hilary Clinton looks like a lizard

How much cheese can you eat before you explode

I wish for death

If you have the zika virus does your brain carry on growing of does it not because your skull is smaller.

ASK the scientists any questions you have about science.

CHAT with the scientists in a 30 minute long text chat booked by your teacher.

VOTE for your favourite scientist to win a £500 prize to spend on communicating more science.

Your brain is located in your head, protected by your skull, and is the main organ of your central nervous system. All vertebrate and most invertebrate animals have brains (only a few don’t, like jellyfish and starfish). The human brain is made of blood vessels, glial (glue) cells and around 100 billion neurons, which send and receive signals transmitting information around the body. 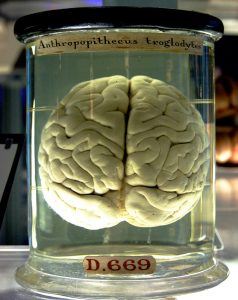 A chimp’s brain at the Science Museum, London | Image by Gaetan Lee

In this zone, you will meet scientists who are looking at the brains of children, teenagers, adults and elderly people. There is one scientist studying children’s brains to see why some students struggle in school, someone looking at what makes a teenager’s brain different to an adult’s and someone trying to find out whether older people’s brains could be made faster by playing with computers. There is also a scientist trying to understand why nerve cells die when someone has Alzheimer’s disease, and a scientist researching a deadly bug which eats people’s brains!